Learning how to play jazz guitar scales sounds scary to many students of the guitar, primarily because there is a lack of understanding about what a “jazz” scale is.

There are many scales in jazz today used by composers such as Debussy and others steeped in the classical traditions of western music, such as the diatonic scale.

Adjust the diatonic scale by adding different tones and you will get jazz scales such as the bebop scale.

It really helps to learn just a little bit about the basics of what a jazz guitar scale really consists of to take away that feeling of, “you want me to play over what chord?”  There really isn’t anything to sweat about.

To beginners, it can seem like there is almost a magical formula involved in creating a simple major scale but we are going to unravel that one right now.

There are no sharps or flats to worry about if we look strictly at the C major (M) scale as an example.

If you look at a keyboard, you will see that only the white keys make-up the CM diatonic scale.

The magical formula we intimated at earlier uses the white keys only as follows:

You will notice that there is no black key in between the E and the F or the B and the C.  This is a half-step whereby the rest of the notes in the scale are tonally further apart (whole step) because of the extra note in between them.

This is the same on the guitar fretboard.  The E and the F are right beside each other as are the B and the C while the rest of the notes on the fretboard have an extra fret in between them.

How Do I Play a Major Scale?

The best way to learn and play a major scale is to practice one scale at a time in all positions, not just all scales in one position.

Playing in different positions in one sitting really builds a comfort zone with scales.

Let’s say we want to play the C Major scale in what we can call the 6-2 position.

The 6 means the sixth string and the 2 means you start playing the scale with the second finger on the sixth string whereby the finger always starts on the root note of the scale.  It really helps to know the notes on the 6th and 5th strings to get your bearings.

So, put your 2nd finger on G on the 6th string of the guitar (3rd fret) and we are ready to play the G major scale as seen in the fret diagram below.

But first, here is a little trick.

How Many Scale Positions do I have to Know?

The answer is at least seven.

Many guitarists including me deem the following seven scale positions as the important ones.

These seven scale positions in a string to finger relationship are:

If you want to master jazz guitar scales, these are pretty much a must know (inside and out).

Here are the three groups of related fingerings. 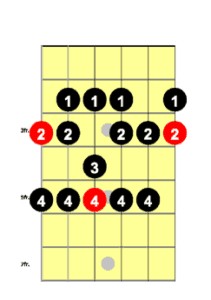 Remember, you can start on any note on the 6th or 5th strings and still use this position anywhere on the fretboard.

The second group starts on the 4th finger.  Let’s take a look at a CM starting on the eighth fret. 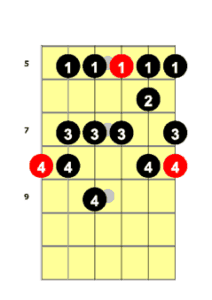 A little pinky stretch in that one. 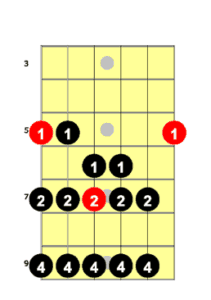 This allows you to play all seven positions of the major scale.

Ensure that your thumb is behind the neck when playing these scales and fretting hand arched as if holding a ball in your palm.  This will greatly aid you in proper technique for playing your guitar in general.

I know this feels like a lot of information but once you have mastered the major scale positions we have discussed, you basically already know the minor melodic scale positions because there is only a one-note difference.

That difference is the third interval.  That is the only difference between the major scale and the melodic minor scale.

All you have to do is flatten the third in each scale position and you have the melodic minor scale.

And, to top that off…

The majority of jazz music performed is in the major and melodic minor scales.

So, by learning this information you will have really conquered a large portion of the jazz guitar scales right here.

Enjoy, and remember to pace yourselves when doing scales because it can be easy to overdo it at first.