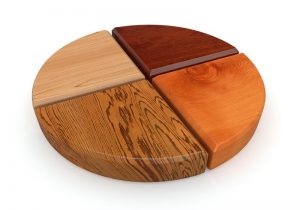 People who don’t play an instrument often believe an electric guitar or bass is basically just a board with strings on it.

While that might be true from a certain point of view, musicians know that instruments come alive in their hands. Each instrument has a unique voice and feeling, and two are rarely the same—even if they might look alike.

Every part of an instrument matters. Strings matter, hardware matters, the type of paint matters. Above all, the wood matters. The type of wood, along with how it is treated in the factory, will determine what the instrument looks, sounds, and plays like.

What types of woods are used for guitars?

Not all woods are suitable for use in all parts of a guitar. Spruce, for example, is often used for tops in acoustic guitars, but is not an ideal material for electric instruments. Each of the main tonewoods has its own place, and is chosen for its particular characteristics.

To qualify as a good guitar wood, a wood must be strong enough to hold up structurally, but also have the tonal characteristics that a luthier is looking for for a particular project. As such, each project demands its own approach.

Maple is a very hard type of wood with good tonal qualities and good sustain. Guitar necks are traditionally made from maple, in part because of its strength, and in part because the material can highlight and amplify the wood in the body. Maple is also often used as a top for the guitar body, partly because it is beautiful (think flame, or quilted maple tops), and partly because it can brighten a sound that would otherwise be murky. 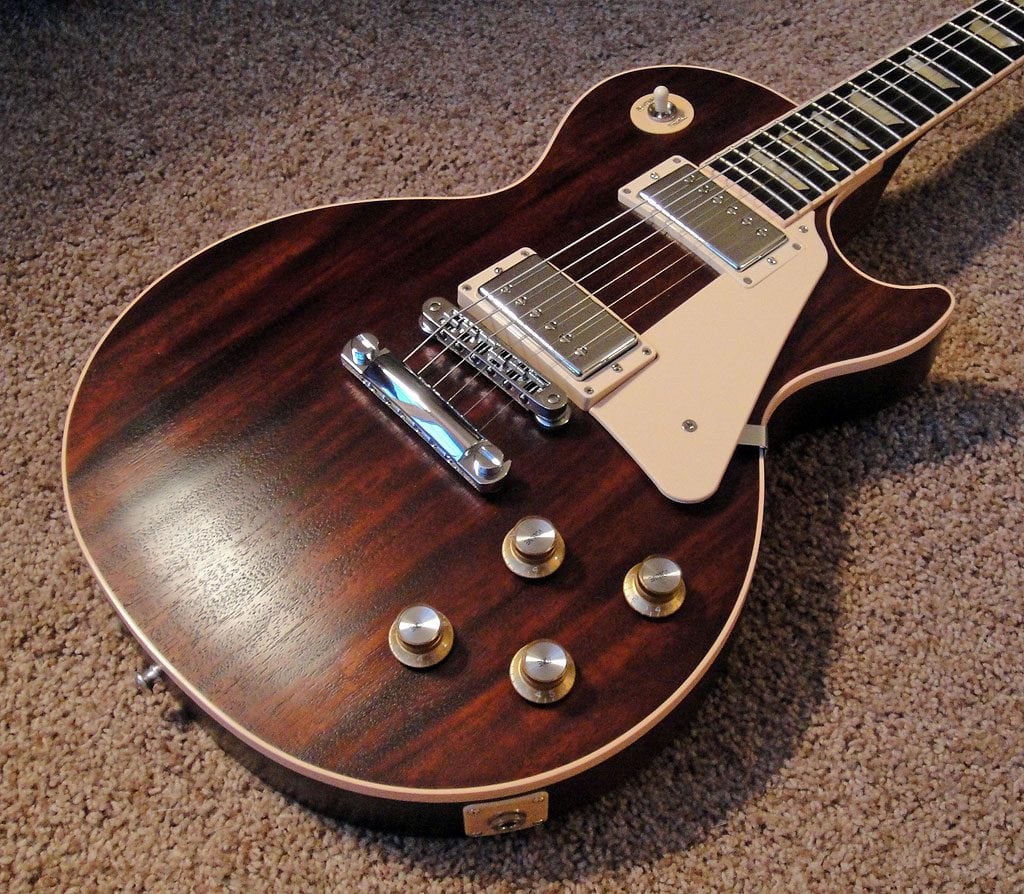 Many guitar and bass bodies are made from Mahogany. There are 49 types of Mahogany, but many are practically extinct because of the wood’s popularity for furniture and musical instruments, and the types used today are not the same as the Mahogany used in guitars in the 1940s or 1950s. Mahogany gives a warm timbre with a lot of bottom end. Les Paul type guitars often combine a mahogany body with a maple top for a total that is balanced overall. 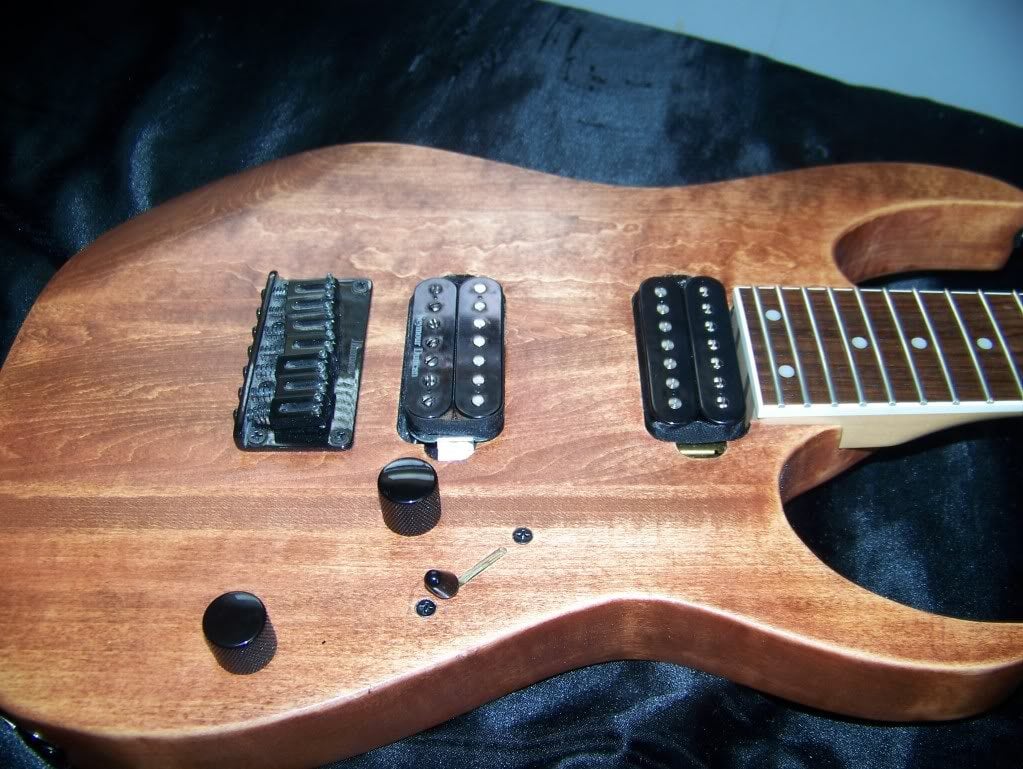 Basswood used for the guitar body on an Ibanez RG7

Basswood comes from Linden trees, and it is soft and easy to work with. A side effect of being soft is that it also dents easy. Because it doesn’t have much of a grain or color, it’s most commonly used on instruments that have an opaque paint-job, though this isn’t always the case (as in the photo above). Basswood has a warm, balanced sound with great mid range and good sustain.

A Stratocaster body made out of Alder

Alder used to be very popular in the 1950s and 1960s, and many Fender guitars from that era are made from Alder. Today it is a bit more expensive of a wood, relatively, and isn’t as common. It is lightweight, has beautiful grain patterns, and gives a warm sound with plenty of highs. An instrument made from Alder is likely to have less midrange and bass than instruments made from other types of wood. 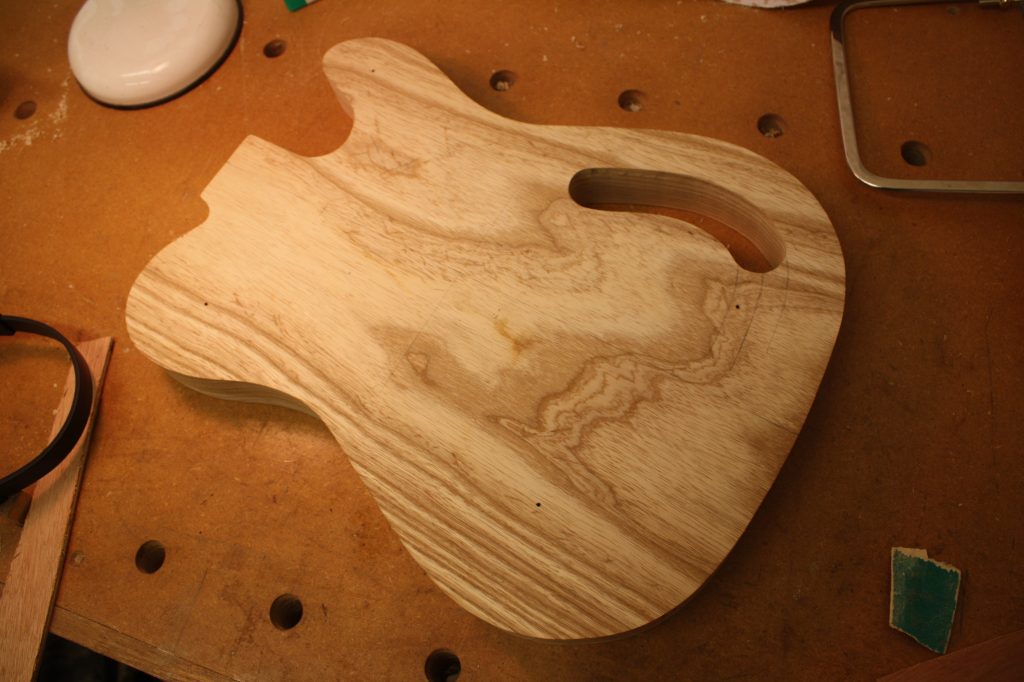 A Telecaster body made from Swamp Ash — image c/o chrisbewick.com

Many American guitar factories use Swamp Ash because the wood is lightweight, pretty, and has a pleasant timbre. Swamp Ash has good sustain, firm bass tones, bite in the midrange, and airy highs.

Other popular guitar woods include Korina, which was made popular by Gibson in the late 1950s. It is beautiful yet light, and gives a warm and balanced sound with good sustain.

Japanese Ash isn’t really related to any other form of Ash, but it looks similar. This is an expensive guitar wood with bright highs and midrange, good bass, and great sustain

American Tulipwood (Poplar), Wenge, Phoenix, Paulownia, and Agathis are other woods often used in guitar bodies, each with its own specific tonal qualities.

Besides the type of wood, individual pieces or blanks each have their own unique characteristics in terms of feel and tone. It depends on where the tree grew, how quickly it grew, and how the wood was treated once the tree was cut down.

The material in the neck and fretboard also matters. Some guitars have both neck and fretboard in maple, and they will typically have a bright and open sound. Rosewood has traditionally been used for fretboards, usually combined with a maple neck, because it is a hardy and oily wood that can stand up to extensive human contact. Rosewood will give a darker tone than maple alone.

Later years hace seen restrictions in Rosewood import and usage, and other materials are becoming popular instead. These days, many luthiers have started using woods like Pau Ferro and Cocobolo instead of rosewood, with good results.

Ebony is a beautiful and very hard wood popular for fingerboards, though it is not seen as commonly because it is both rare and expensive. Ebony is especially popular on fretless guitars, where it is more durable than softer materials that are easily worn down by the strings.

Has the wood used in guitar building changed over time?

There are differences between the types of wood used in many old guitars compared to what today’s luthiers use, but whether the sound is better or worse is subjective.

Some types of wood that were commonly used in the 1950s are close to extinct today, and can no longer be used for mass production. For instance, import and usage are restricted for certain types of Mahogany, Rosewood, and Ebony, and large guitar manufacturers in the US have been raided by the justice department on suspicion of using illegal materials.

Are all guitars made from wood?

There are guitar manufacturers who don’t use wood. Some instruments are made from Aluminum, and some use Aluminum for the necks and fret boards. Others use Carbon Fiber, and others yet take another path away from traditional tone woods. Danelectro, for instance, make a frame out of Poplar and cover it in Masonite.

Each instrument is different—that’s part of what makes them so great. You might have to try many before you find one with a voice that resonates with you.