The common cliché that “tone starts in the fingers” is quite accurate. Remember, however, that your fingers create that tone by interacting with your strings of choice. There are hundreds of different sets of strings out there that use differing materials, gauges, and construction techniques. If you’ve dug deep enough into all of the differences between different brands of guitar strings, you’ve undoubtedly come across a classic—and unsettled—debate: are round core guitar strings or hex core guitar strings better?

Well today we’re diving into the important differences between these two primary varieties of guitar string construction to help you decide what’s right for you and your instrument.

The primary advantage of round core construction is that more of the surface area of the core wire is in contact with the winding (in theory, nearly 100%) which means a greater density for a string of the same gauge, vs a hex core string. Generally, round core strings are slightly more flexible than their hex core brethren.

Tonally, the biggest different with round core guitar strings is that they tend to have a much boomier bottom end, and less high end clarity than hex core strings.

At Stringjoy, we use round cores in our pure nickel Broadways, because that boominess gives them a full, bottom-heavy characteristic that we really dig. 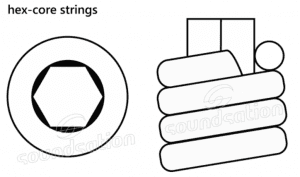 Though round core guitar strings were the only game in town for many years, in modern years most companies have switched to primarily manufacturing hex core guitar strings. These strings utilize a hexagonal core wire underneath the outer winding layer, which helps to hold the wrap wire stable and in place. Generally speaking, this stability gives hex core strings a slightly stiffer feel, but also enables them to hold tune better and as a result, be less susceptible to premature breakage.

If you have played a modern electric or acoustic guitar, you are probably more familiar with the feel and tone of hex core strings. Hex core strings are generally perceived to have a brighter, less muddy tone than round core strings. Many also perceive hex core strings to have a tighter pick attack and increased clarity. Because of this hex cores are especially necessary for guitarists that make use of extended or drop tunings to retain sonic clarity for a more modern sound.

We utilize hex cores for our nickel wound Signatures as well as all of our acoustic guitar strings because of the advantages they provide in tuning stability, longevity, and high-end clarity.

What’s best for you?

There’s a lot of hype and strong opinions in each camp of the round core vs hex core debate—when it comes down to it, everybody thinks their way is best. But ultimately, as with all things guitar, things like tone, feel, and performance can be quite subjective, so the only way to know what’s best for you is to try different things and see what works best for you.

Grab a set of our pure nickel, round core Broadways and feel all that vintage mojo for yourself.

Or, try a set of our nickel wound, hexagonal core Signatures and get the fast attack and presence it takes to cut through the mix.