You’re not going to find these expensive guitars at your local music or pawn shop. (And if you do find one in the latter, don’t leave there without it!)

With legendary names like Blackie, Tiger, and “the Holy Grail of Guitars,” and equally legendary players such as Hendrix, Clapton, and Richards behind them, these expensive guitars are the cream of the crop. They’re not only amazing playing guitars, they’re true pieces of musical history. As such, as you might guess, they have commanded commensurate prices.

With Eric Clapton having owned three of these instruments, Jerry Garcia two, and Bob Dylan, Bob Marley, and Jimi Hendrix all making appearances, you know these guitars are selling above book value. So without further ado—at press time—these are the top 10 most expensive guitars ever sold.

#1 Most Expensive Guitar: Fender “Reach Out To Asia” Stratocaster

Let’s go ahead and lead with the goods. The Fender “Reach Out To Asia” Stratocaster, rumored to cost Fender between $15,000-25,000 to produce, was the result of the Reach Out to Asia project, conceived by Canadian rocker Bryan Adams. Adams organized the venture to raise funds for victims of the 2004 tsunami in the Indian Ocean. And raise funds it did.

The guitar, signed by 19 artists, including such heavyweights as Clapton, Page, Gilmour, and Iommi, sold for a staggering $2.7 million at auction—making it the most expensive guitar sold to date. But it’s not without its competition for the top spot, as you’ll see throughout this list. 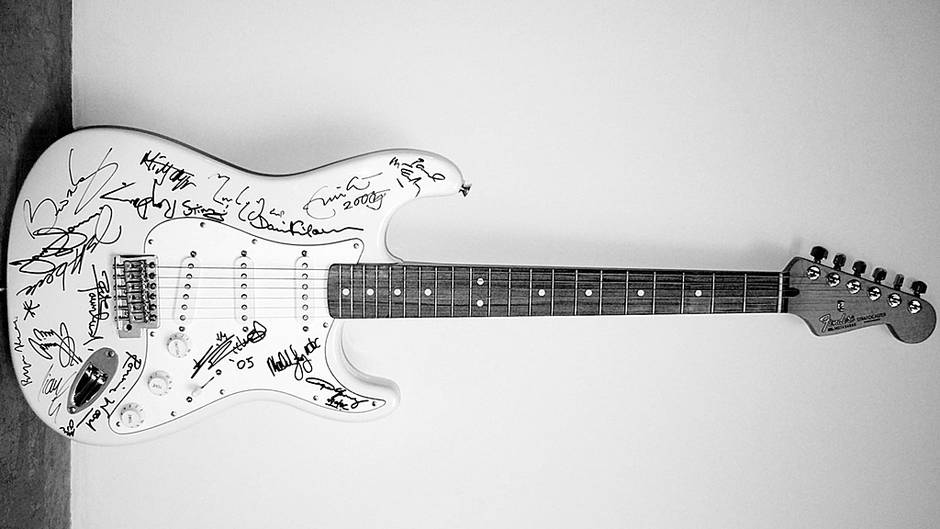 This 1959 Les Paul was initially owned by Fleetwood Mac founder Peter Green, and later used extensively by Gary Moore—and you can tell at a glance that it’s been put to good use over the years by all of the beautiful wear it exhibits. Metallica-guitarist Kirk Hammet bought it from Richard Henry Guitars in 2014 for the reported sum of 2 million dollars. But for a guitar this good-looking, and this loaded with history, it’s probably a pretty good deal, all things considered. 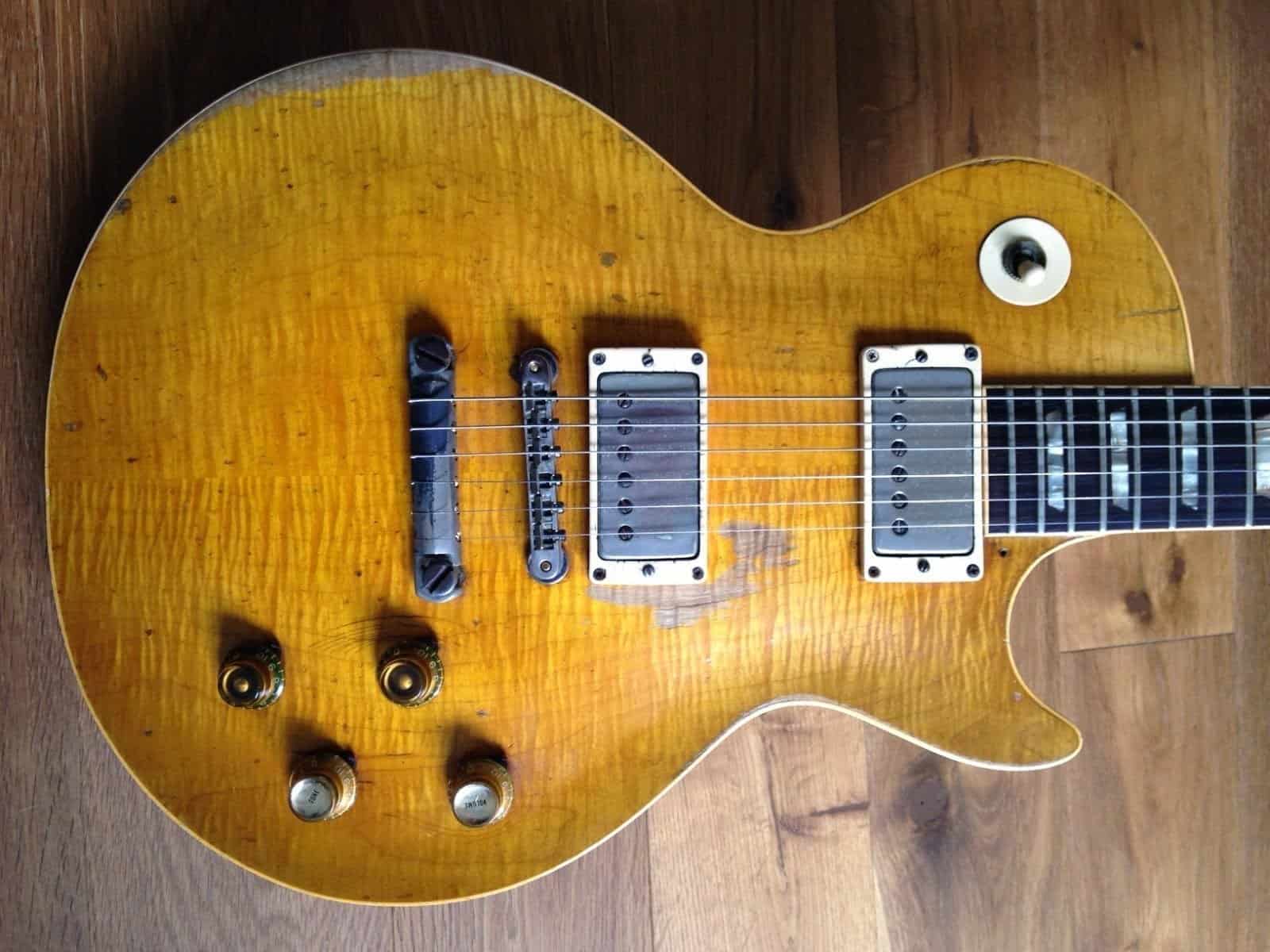 Since both Peter Green’s Les Paul and Hendrix’s ’68 Strat are reported to have been purchased for 2 million, we’re going to go ahead and call this one a tie. On its own, this guitar—a stock, right-handed Strat with Olympic white finish, is nothing spectacular. Well, it’s a ’68 a strat so that’s pretty awesome to begin with, but we’re speaking relative to others on this list.

However, this is an axe that every guitar aficionado has heard. And probably seen. Hendrix played this one at Woodstock—you know, that Woodstock—and it was the guitar slung upside down around his back his now-legendary early-morning rendition of “The Star-Spangled Banner.” Paul Allen, co-founder of Microsoft, reportedly bought it in 1998 for an estimated $2 million. Quite a bit of scratch for the rest of us, but for him, that’s chump change…

Jerry Garcia’s first of two axes on the most expensive guitar list, built by Doug Irwin, Wolf —named for its distinctive artwork—was initially sold at the same auction as another guitar of his, Tiger, selling for $789,500—less than Tiger fetched (as we’ll get to below). But in 2017 it came up for auction again, fetching a whopping $1.9 million dollars this time. I’d say that was an investment that paid some serious dividends, but the latter auction was actually to raise money for the Southern Poverty Law Center, which is a pretty solid cause in our book. 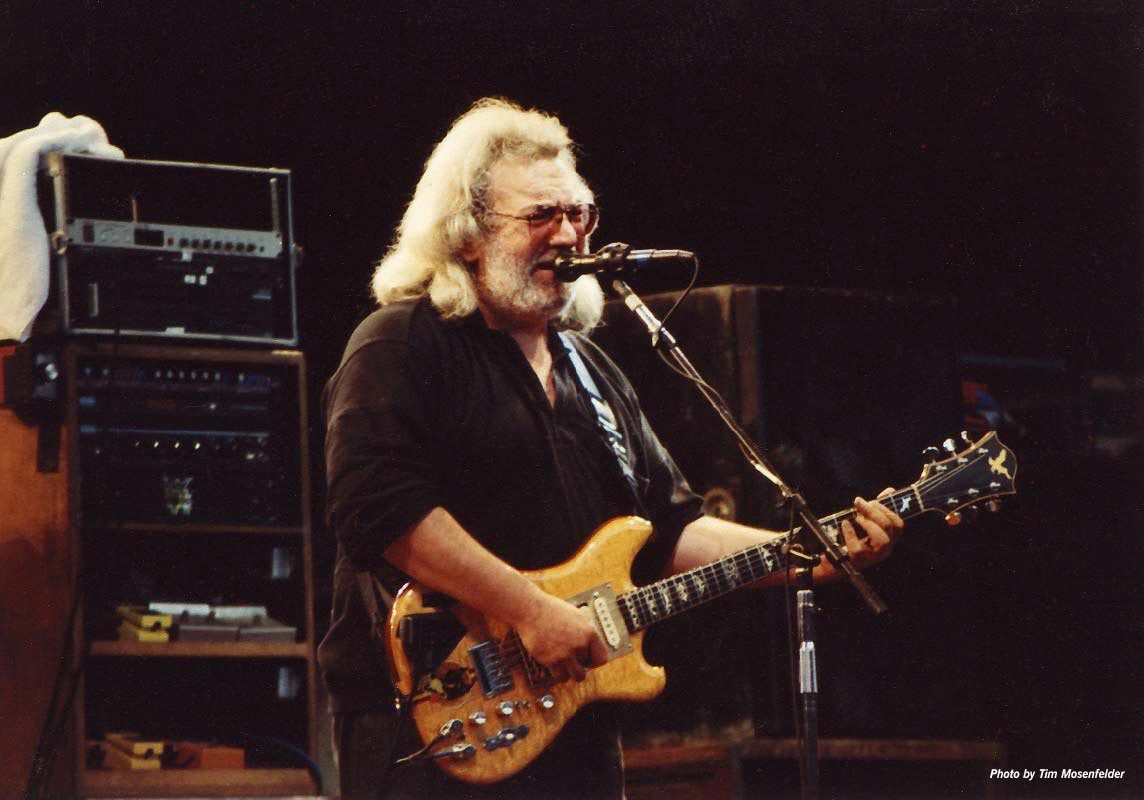 Reggae legend Bob Marley only owned seven guitars. Just think about that. I owned seven guitars by the time I was twenty-one. Sure, they weren’t all quality pieces—especially compared to the axes on this list—but still. Anywho, one of the seven he owned was the 22 fret, double cutaway Washburn you see here.

Marley gave this guitar as a gift (and what a gift it was) to his guitar tech, Gary Clausen, though its whereabouts today are secret. The Jamaican government, which understandably declared the instrument a national treasure, is rumored to have purchased it for somewhere around $1.2-2 million.

Editor’s note: Yes, it’s possible that this one might have sold for 2 million and should be higher up on the list, but since the estimated range was lower, we put it here. The 1959 Les Paul standard is on its own known as the “holy grail” of electric guitars. There’s not all that many of them still in existence, and even for one not owned by anybody particularly famous, you’re going to pay six figures for one. So it’s no surprise that we’ve got two of these beauties in the top 5 of our list, this second one having belonged to Rolling Stones guitarist—and Open G afficionado—Keith Richards. Keith played this Gibson during the Rolling Stones’ debut performance on the Ed Sullivan Show, a watershed moment in the history of Rock and Roll. The guitar sold for $1 million at auction in 2003. 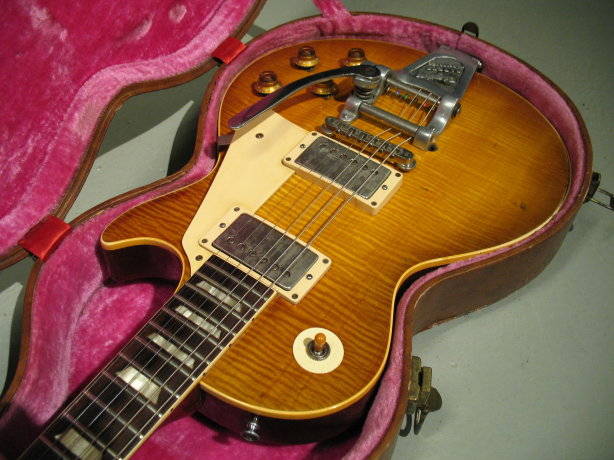 Bob Dylan played this Strat, to not a few boos, incidentally, at the Newport Folk Festival in 1965, marking his transition to electric instruments and incurring the wrath of folk purists everywhere. Like anything provocative, it garnered its fair share of attention and earned its place as a pretty legendary instrument. Largely because of this, it sold for a cool $965,000.

I think the most interesting thing about this instrument is that it was pretty darn new when it made its legendary debut, only a year or so old. 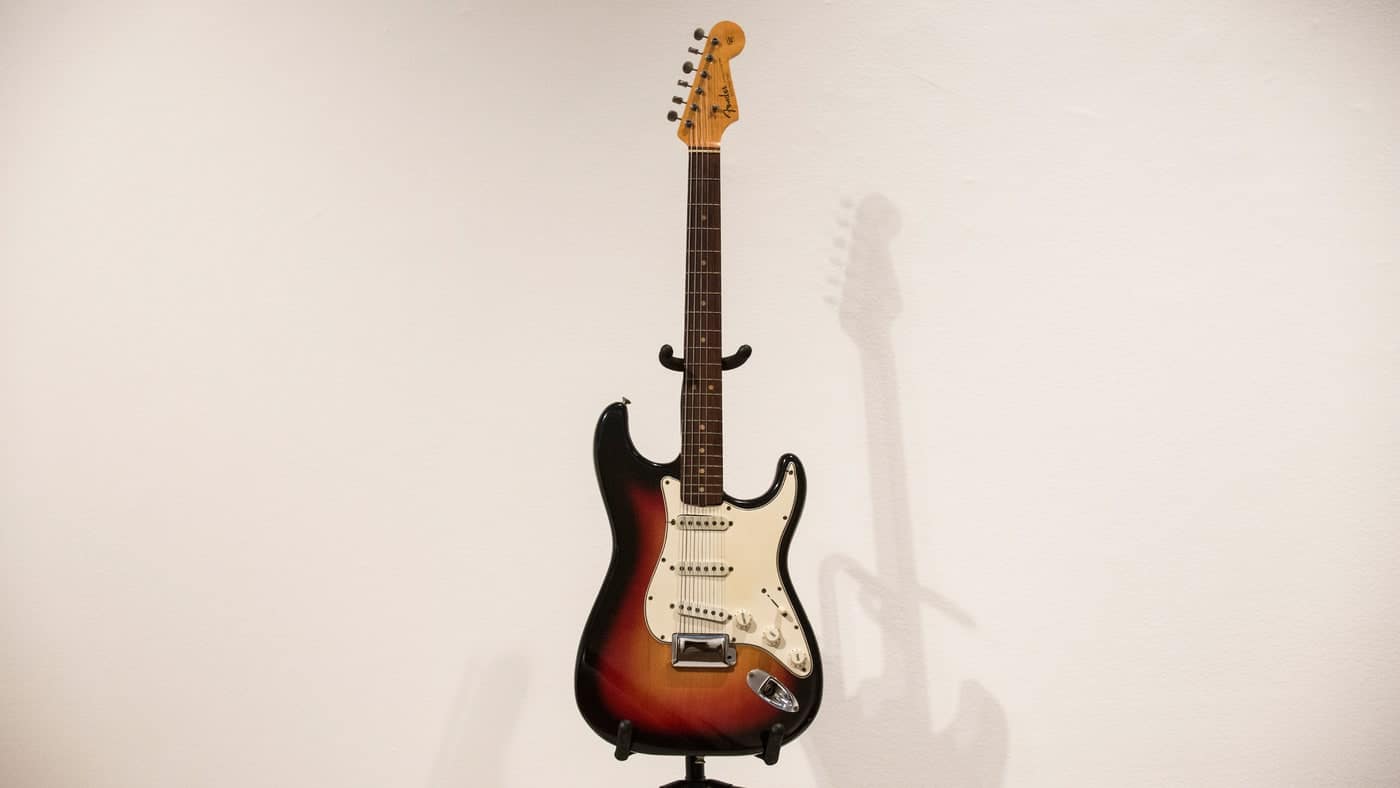 After buying six guitars and giving one each to Pete Townshend, George Harrison, and Steve Winwood, English blues legend Eric Clapton cobbled together the best parts of the remaining three to create Blackie, his famous Fender Strat. After playing it in countless live appearances and studio sessions, Clapton retired Blackie in 1985, and sold it at auction in 2004 for $959,000 to benefit Crossroads, his recovery center. 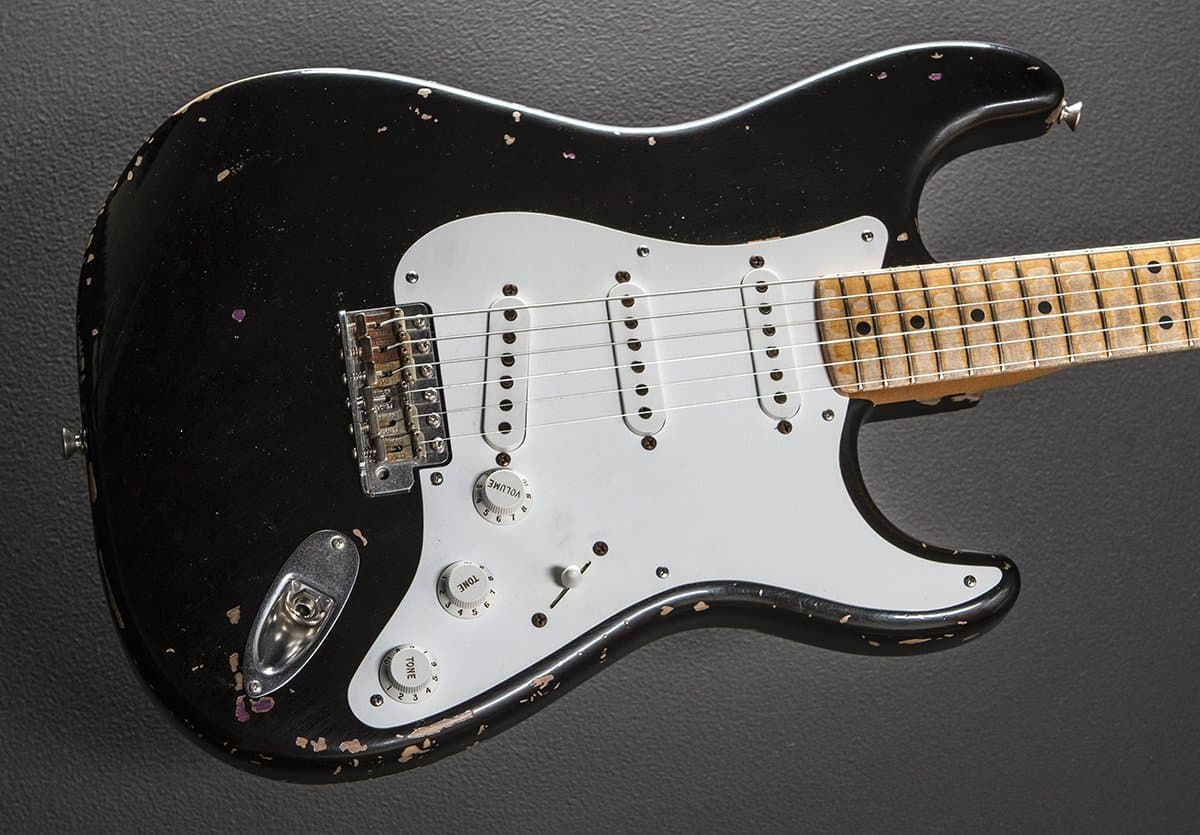 This Doug Irwin custom guitar was Jerry Garcia’s main axe from 1979-1989, when the Grateful Dead exploded in mainstream popularity. As you can see below, it gets its name from the artwork behind the its concave bridge.

Due to a problem with Rosebud, Tiger’s successor, Tiger was the last guitar Jerry Garcia ever played in public. Tiger was auctioned in 2002 for $957,500, including commission. 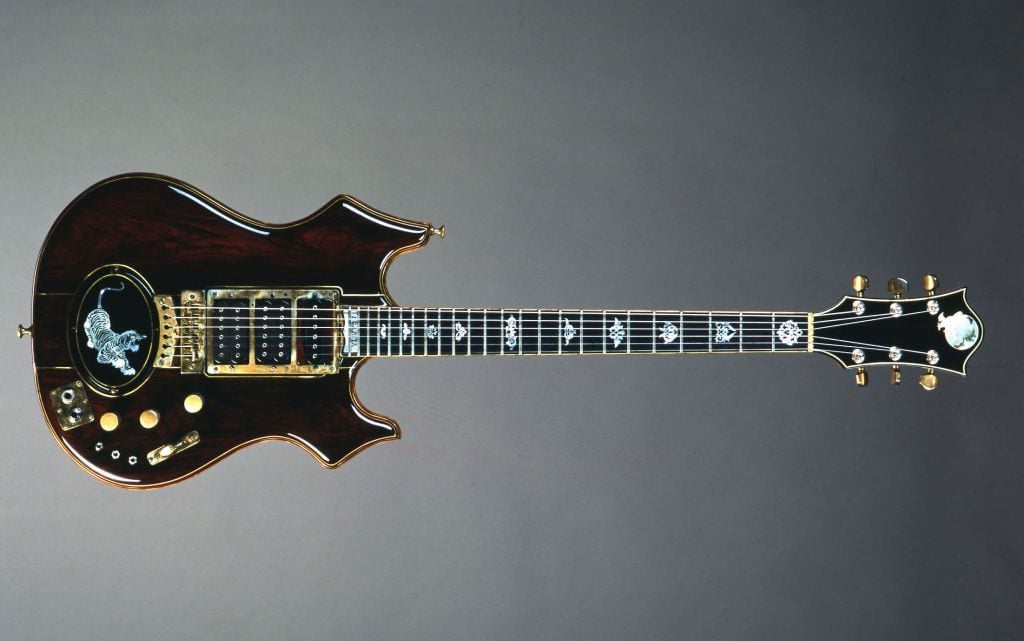 The second of three Clapton axes to appear on this list, Clapton primarily played this Gibson during his tenure with the Yardbirds in 1964. However, this guitar featured prominently in a couple key Cream moments, as Clapton played it during the final Cream show in November of 1968, as well as on the track, “Badge,” cut in December of that year. Like Blackie, it was auctioned in 2004 to benefit Crossroads, but this one fetched just a bit less, bringing in a perfectly respectable $847,500.

The only acoustic guitar to make the most expensive guitars list, Eric Clapton played this Martin during his now-famous 1992 MTV Unplugged session. Pre-war Martins are expensive guitars to begin with, but when they’re owned by a legend the likes of Eric Clapton, used on countless classic recordings, and kept in great playing shape all the while, well, let’s just say they go up in value. 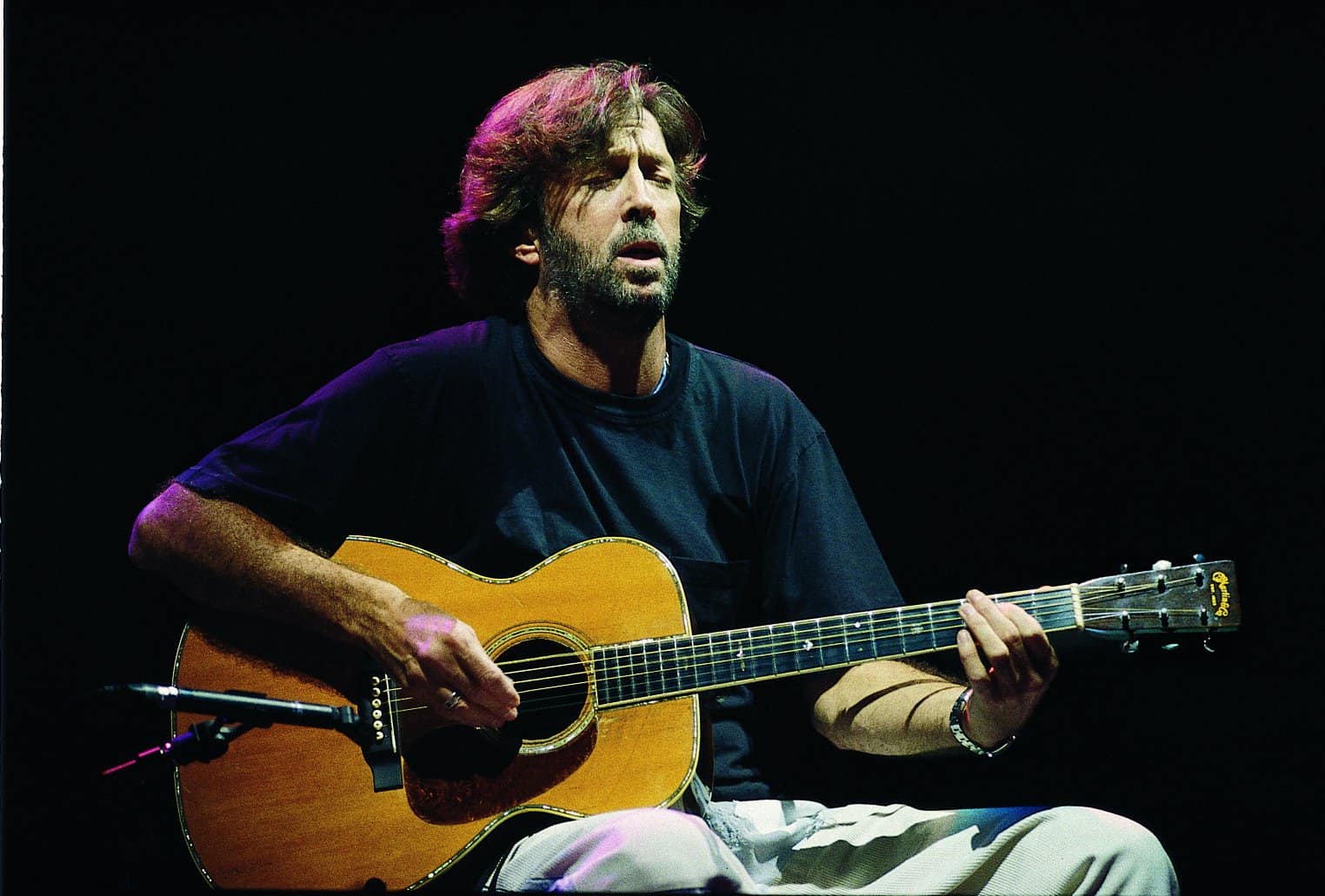 So, what do we make of all this? Well, it seems that there are really two classes of collectible guitars, the first being guitars that are respected due to their esteemed vintage, or coming from a particularly meaningful or good year (’58 and ’59 Les Pauls for example). These guitars fetch a high price, but not quite enough for any of them to land on this list. Then there’s the second class, guitars owned by players who re-shaped music history—instruments that have now become pieces of history themselves. The latter class are the guitars that fill this list, and I assume that if you looked up the next ten or fifty most expensive guitars ever sold, this trend would continue.

I think the most interesting part of this whole thing to me is that while these guitars cost more money than your average Joe might ever see in his life, for the ultra-rich, it’s not all that big of an investment, all things considered. I mean, a Bugatti Chiron costs 3 million—would you rather have that or Hendrix’s Woodstock Strat? Personally, I’d take the strat.

Want to dig deeper? There’s plenty of lists comparing the most expensive guitars ever sold floating around, some are a bit outdated, but there’s more info out there if you hunt for it. And hey, if you start saving our pennies now, maybe in a few centuries you’ll have one of the guitars on this list!