Willie Nelson has entertained audiences since he was 13 years old, and through the decades his guitar Trigger has become almost as famous as he is. Trigger is an old Martin N-20, and few instruments have been played as much, or as well as it has.

Nelson met the nylon string Martin guitar in 1969 after a drunk destroyed his last guitar. He wanted an instrument that could help him get a sound more like Django Reinhardt – his biggest musical influence. The Martin fit the bill, and he named it Trigger after Roy Rogers’ horse. 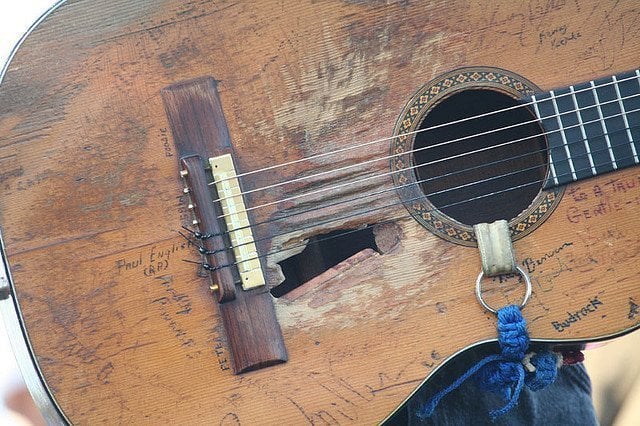 The story almost ended before it began. On Christmas 1969, Nelson’s house caught fire, and he dared the blaze to save the guitar. In Rolling Stone’s documentary about Trigger, Nelson remembers the day fondly, “Well, I saved Trigger, so it was a good day.”

The house burning down seemed like a sign, and Nelson and Trigger moved from Nashville to Texas to play honky-tonk clubs. He had done well as a songwriter for others, but his solo career had yet to take off. Texas offered another climate for musicians, and Nelson was a success. In Texas he could push the boundaries and experiment with his music. At the time no one else had amplified acoustic guitars, and he used this technique to craft his own unique sound.

The two have been virtually inseparable over the decades, and if Trigger can’t go on stage, Nelson won’t go on either. Band members consider Trigger a part of the band, but with one important difference: if something happens to one of them the show will go on. If Trigger can’t play, Nelson won’t play.

How long can the guitar stay together?

There are instruments older than Trigger, but few guitars have logged as many playing hours in a lifetime, and Nelson plays hard. This type of acoustic guitar wasn’t intended to be played with a pick — and the wear shows on the top — but Trigger is also a testament to just how durable a fine guitar can be.

By now the frets are worn down, the top is covered in cuts and autographs, and despite several repairs there is a large hole through the front of the guitar. Trigger sees a guitar technician at least twice a year, and despite everything the instrument has been through it has no major cracks, the back is whole, and the headstock has never been broken.

All this wear has shaped the timbre into something unique – Trigger is an instrument that sounds like no other.

Nelson has said in interviews that he thinks they’ll give out at about the same time. The only time they’ve been apart was when the IRS went after Nelson’s possessions and Trigger had to hide away in Hawaii until the dust cleared.

The material of a legend 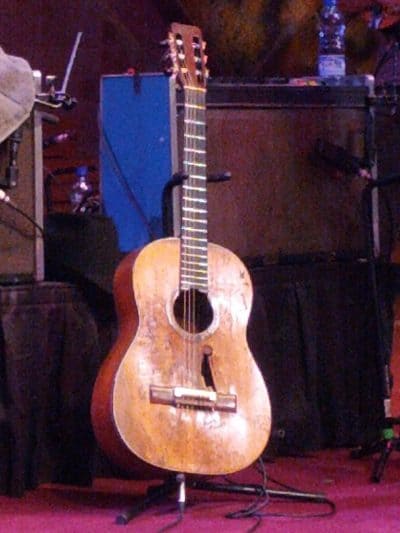 Trigger has a Sitka spruce top, Brazilian Rosewood back and sides, and a mahogany neck. The fretboard and bridge are made of ebony. This combination of tonewoods gives the guitar a warm and mellow sound.

The Martin Guitar Company made a limited edition Willie Nelson signature in the late 1990s — model N-20WN. Thirty guitars were made with the rare Brazilian Rosewood of the original, and the rest were made in East Indian Rosewood.

Willie Nelson recently hit the headlines again, not as a musicians, but as an author. His autobiography will be released on May 5th, shortly after his 82nd birthday. The book is called, It’s a Long Story: My Life, and Trigger will surely feature prominently in its pages.