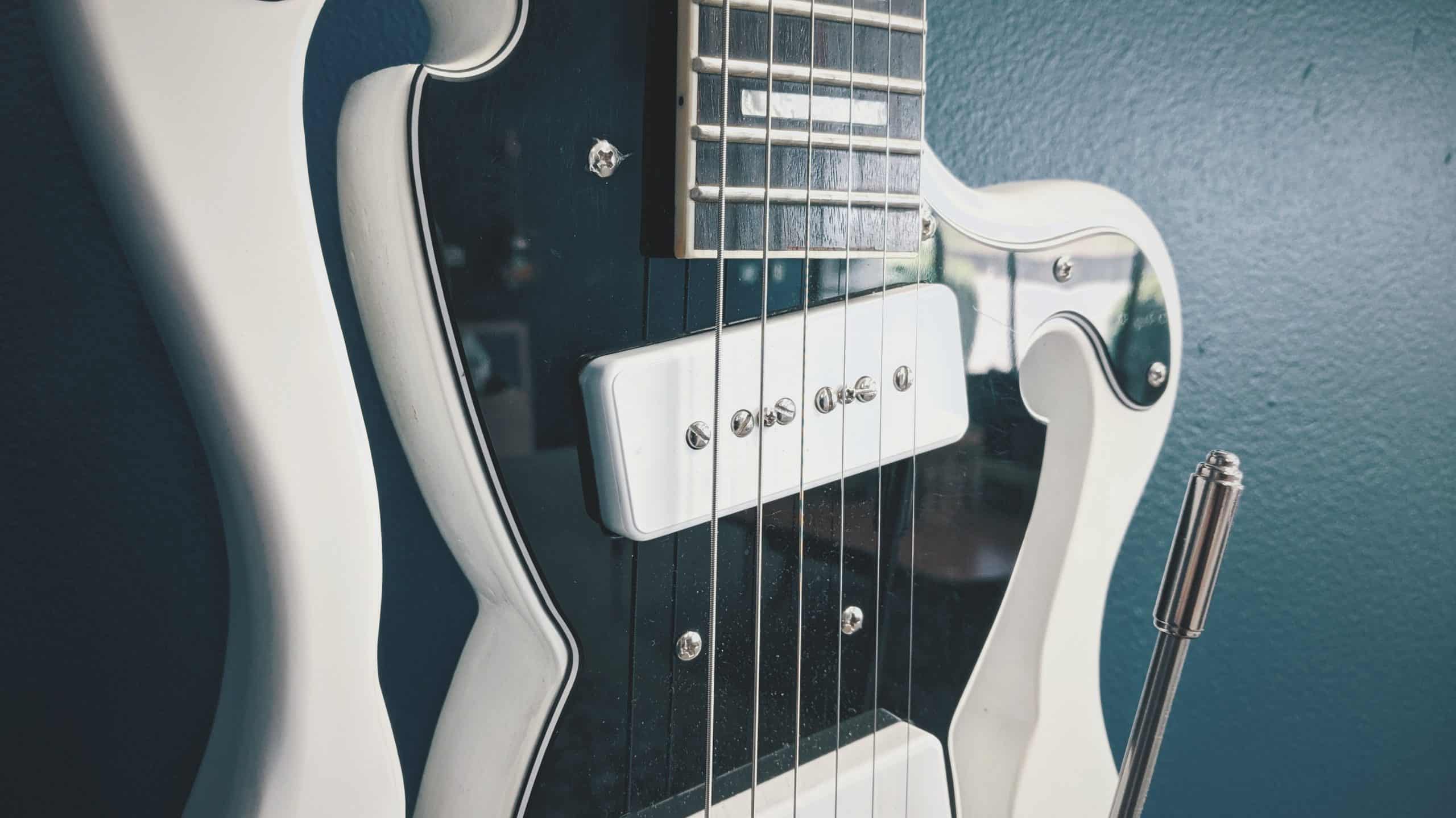 Whether you are interested in upgrading to a better set of pickups or finding a different set to add some tonal variation to your rig, there are so many types of guitar pickups out there that it can be hard to understand which pickups are right for you.

So, helpful folks that we are, we put together a brief overview of all the major types of guitar pickups you’ll find on common—and some uncommon—guitar models. Below you’ll find a rundown of the major pickup families, along with some great videos that show the tones these fellas are capable of.

As with most things, each brand and pickup maker adds their own unique touches to their products. Two humbuckers—take a Gibson PAF humbucker and a Reverend Railhammer humbucker, for example—may have some subtle or not-so-subtle sonic differences that make one a better fit for a given player. But for the purpose of this article we’re just going to compare the main families of pickups, to give you a general sense of what each has to offer.

But first, before we jump in, let’s start with a brief rundown of how pickups work to create that beautiful guitar tone we all know and love.

All pickups convert your string’s vibrational signal into an electrical signal that can then be amplified and altered throughout your rig. The magnets, wrapped in copper or other metallic wire, in the pickup create and project a magnetic field around the strings. Once a string vibrates, it disrupts this magnetic field. The stronger the signal, the stronger the volume or output of the pickup, which is a big part of what drives us to choose certain pickups for guitars, genres, or playing styles.

Looking for info on Acoustic Pickups? Check out our guide to the major Acoustic Guitar Pickup Types.

One of the most well-known types of guitar pickups alongside the Gibson PAF, single coil pickups have often become colloquially known as Fender or Strat style pickups. They are also one of the most basic pickup setups featuring the magnets wrapped in a single coil of wires, giving a simple and clear signal that can capture many distinct tones based on where they are in the guitar body.

The normal Strat-style three pickup setup allows for bright and warm neck tones and hotter, louder output bridge tones. In this setup, the middle pickup is most often used in conjunction with either of the other two pickups via the 5 way selector switch to get what many call that Fender “snap” or “spank”.

The Telecaster also popularized its own version of single clil pickups with a few small modifications such as two pickups as opposed to three, and with modifications to the base plates.

The well-known downside to single coils is their susceptibility to electrical interference, creating a “hum” or buzz noise at loud volumes known as “60 cycle” hum.

Frequently seen on early Gibson guitars, P90’s are still a single coil pickup but provide more output than Fender Strat-style single coils and tend to break up an amp at a lower volume.

Often recognized for their presence on Gibson Les Paul juniors, they are regarded as very versatile pickups and feature a bit of a fatter sound than standard single coils with magnets featured under the coil instead of being wrapped in the coil.

The pole pieces are also more similar to that of a humbucker than a Fender single coil—there was undoubtedly some co-evolution between the P90 and ‘bucker during Gibson’s formative design years.

Humbuckers are one of the most popular and well known types of guitar pickups (along with the Strat-style single coil and P90). The Humbucker arose from the need to get more volume and output from pickups while also negating the loud hum that was generated by single coils.

A humbucker is essentially two coils right next to each other with reversed polarity that cancel out each other’s extraneous noise, or “buck the hum”, thus the name. A byproduct of having these two coils together is that they produce a big, warm sound that has become associated with the fat sound of Gibson guitars.

One modern twist that has made them even more popular is the addition of “coil tapping” where at the pull of a knob, only one of the two coils will be engaged. This gives the player more a brighter, cleaner, single coil sound. This addition now gives players with humbuckers even more tonal options at their fingertips.

Originally created by Epiphone, a mini humbucker is in a lot of ways, just a shrunken humbucker (who would have known??), but it does have some subtle differences from it’s big brother.

Sensing a shorter length of string vibration above it, the pickup produces clearer and brighter sounds that are quite a ways from the warm, fat, and rounded tones of Gibson PAFs or other humbuckers. With the increased output and hum cancelling properties of full sized humbuckers, mini humbuckers are a great way to get a little more of a clear, almost Fender-style sound on Gibson or similar guitars.

Active pickups are a relatively new addition to the guitar world, first popularized by heavy metal players looking for even more gain than was possible from a passive humbucker. The most recognized brand, EMG, has seen their pickups gain some competition over the years from mainstay brands like Seymour Duncan.

Active pickups also are less susceptible to electronic interference than their passive counterparts and can come with onboard EQ meaning you can modify the tone of your pickups before they reach your amp or effects.

Goil foil pickups are maybe best known for their appearances on vintage Supro and Silvertone guitars, as well as on Ry Cooder’s “Coodercaster”, and are without a doubt one of the vibiest types of guitar pickups out there.

In these pickups, gold foil covers the whole pickup just under the metal casing. The screws being placed right above the coils is said to allow them to sense more of the string, helping make the pickup clearer and louder.

Gold foil pickups can come in single coil or humbucker versions, and are noted for their smooth, super clear, and bright high end sounds (funny, considering their humble beginnings on 60’s and 70’s foreign made student guitars). While these were difficult to find for many years, they’ve recently been reissued by several brands and are once again an easily accessible option for players looking to stand out a bit.

BASICS: What Does a Fender Jazzmaster Sound Like? (American Vintage 1965 Jazzmaster Demo)

Technically, these are just another type of Fender single coil that is often confused with P90’s (understandable, considering that there have even been versions of Jazzmaster pickups that are nothing but a P90 under the hood).

The main difference between a Jazzmaster pickup and a  P90 is that the pole pieces of the coils on these are magnets where as P90’s have the magnets underneath the coil. This style is often popular with jazz, surf, and indie rock guitarists who have adapted the Jazzmaster as their main instrument.

Jazzmaster pickups also feature “Pancake” winding, which is wider and flatter than P90’s, giving it a warmer tone while retaining that single coil clarity.

Jaguar pickups are very similar to strat pickups but with metal “teeth” around them to help remove some of the hum that is usually associated with single coils. These pickups are also mounted directly to the body, unlike stratocasters where the pickups are screwed into the pickguard.

Popular with indie rock bands, the Jaguar pickup has been described in an unflattering sense as a “castrated Strat pickup” despite being similar in construction and components. Because of the Jaguar’s 24” scale length, these instruments have a bit of a snappier tone, though that has as much to do with string tension than the pickups underneath.

Here we have a Fender attempt at creating a modern, high output pickup. The idea was to create a higher-output humbucker, with even less noise than a typical humbucker, by basically adding a third coil to a humbucker.

These were briefly found on Fender’s Modern Player Marauder and were noted for sounding great, so long as you had an overdrive or distortion pedal in your signal chain. Surprisingly, according to many Marauder players, the triplebucker doesn’t naturally break up an amp as well as you’d think it would.

Though you don’t see these in production any longer, I wouldn’t be surprised if someone tried to revitalize and perfect this pickup in the coming years, especially for heavier, metal music.

Featured on G&L guitars most notably and invented by Leo Fender for some previous Fender models, these are essentially the same as standard Strat pickups except that they are split into the Z shape which helps make them hum-cancelling—another attempt at removing the hum of single coils without giving up the clarity or tone.

They are noted for sounding almost identical to Fender Strat pickups (sans hum of course) and G&L has done some interesting wiring work to enhance the pickup combinations on models featuring these, such as the three-at-once pickup mode on their Comanche model.

Popularized by many of Gretsch’s most famous hollowbody models, the Filter-Tron pickup (and its recent copies by companies such as Lollar, TV Jones, and Seymour Duncan) is a retro-looking humbucker-type pickup loved by players of many genres, but especially famous for its use in rockabilly music.

Smaller than traditional PAF-style humbuckers, the Filter-Tron features two single coils very close together with a much larger magnet than normally seen on pickups. This design, combined with the taller bobbins placed on the pickup contribute to what is a brighter, less warm tone than other humbuckers while still minimizing the hum and buzz.

These pickups were popularized by country, western, and rockabilly music which featured such playing styles, which rely on tonal clarity to help distinguish individual notes despite the fast, hectic finger picking. These pickups have also seen a bit of a re-popularization recently after their inclusion on the Fender Cabronita Telecaster.

Potentially better known as Rickenbacker pickups, these vintage single and double coil pickups have helped spawn some of rock’s greatest hits in the hands of John Lennon and Pete Townshend, among others.

The two-slotted “Toaster Top” pickup is generally considered the quintessential British Invasion sound. Both the single coil and humbucker variants of these models are noted for their loud, clean, and treble-forward sounds. One description you’ll often find associated with these guitars is “chime”, especially when paired with British Invasion-era amps such the Vox AC30.

Lots of Types of Guitar Pickups, Lots of Sounds

While there is a nearly infinite supply of types of guitar pickups available to today’s electric guitarist, these are generally the most common models you will run into. While some of the similarities may seem trivial or technical, the best way to truly understand all the versions is to hear them all for yourself. Be it by listening to YouTube videos like the ones embedded above, or going to your local guitar shop and trying a few guitars, get out there and listen for yourself if one has more treble, bass, or that unquantifiable magic sound that inspires your playing.

We couldn’t cover every single pickup subtype here, so if you’re feeling like getting even more adventurous, check out other some more specific variants of the types above, like Lipstick Pickups or Firebird Pickups, just to name a few.